Learned birdsong, which is socially transmitted and accumulates changes across generations, is a powerful model system for the study of cultural evolution. Over the course of transmission, changes can accumulate through a variety of means, resulting in spatial and temporal diversity in song structure. In many species, birdsong is produced by males and is used to compete with other males and attract female mates. Thus, birdsong is generally recognized as a sexually selected trait, and females have been shown to have different preferences for a variety of male song attributes, such as length, complexity, and repertoire size.

I am currently researching how cultural and organic evolution interface through sexual selection in the house finch, a species native to the western United States and Mexico that was introduced to the NYC area around 1940. Using a longitudinal database of historical recordings we can model how transmission mechanisms have shaped song evolution, and assess how female preferences scale with time and space. Additionally, using radio frequency identification (RFID) technology we can reconstruct the social network of a local population to explore how fine-scale cultural variation correlates with other indicators of mate quality. 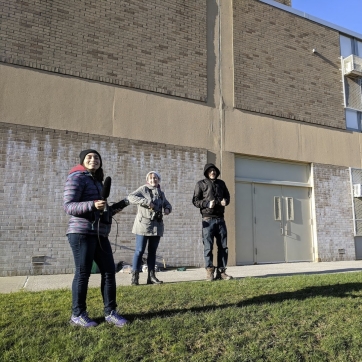 A male house finch banded with a unique RFID tag.

Researchers in the field of bibliometrics, or the statistical analysis of published works, have historically explored assumptions about the development of fields, identified connections between scientific growth and policy changes, and investigated the collaborative structure of interdisciplinary fields. More recently, access to online literature datasets has allowed researchers to investigate previously inaccessible questions about how scientific fields are structured. The construction of co-authorship networks, in which each node represents an author and each link represents a co-authorship relationship, can provide particularly valuable insight into the topography of a given field. Co-authorship represents a direct working relationship between authors, and is often used as a proxy measure for scientific collaboration in bibliometric studies. Additionally, by applying modularity-based clustering to parse co-authorship networks into discrete clusters based on the association strength among nodes, we can identify subdisciplines and assess the structural and intellectual distance between them.

We recently applied a novel combination of network, cluster, and bibliometric analyses to an extensive dataset of publications in cultural evolution, a field that is unified in its application of evolutionary logic to socially transmitted behavior, but diverse in methodologies and assumptions. Qualitative reviews have encouraged integration by illuminating points of divergence and fostering interaction, but this effort would be greatly enhanced by quantitative data on patterns of collaboration and idea sharing in the literature.